The nukes are coming... 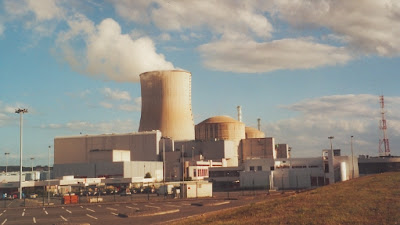 Just over ten ago, I happened to work for a short stretch on an office automation IT project alongside a number of British nuclear power engineers – not a nuke project, I stress. Twas an eye-opener, let me tell you, because each and every one of those engineers were avid nuclear energy advocates. Oh, of course they were! The fact that I wasn’t one of them, and, to be honest, that I was fairly open about my own grave misgivings as to their whole industry mattered not one jot with them: they waxed prolific, evangelised, mitigated this or that safety and sustainability problem, and generally did their utmost to convert me to their way of thinking.

Why so? Probably because outside of that office, they were as close to social pariahs as makes no difference. "What do you do?", they’d be asked at a party; but they’d have to be very careful as to the answer in case it triggers a major argument next to the beer fridge; "Erm, I work in the energy industry…" I was a captive audience, on their patch, and by gad I’d have to listen to them, sir. And I did - anything’s more interesting than IT, and say what you will about the nuclear industry, but no one can accuse it of being disinteresting.

In a limited fashion, their efforts to indoctrinate me succeeded just a tad: I stopped shaking my head whenever reading newspaper articles about this or that Sellafield expansion. I stopped mentally positioning the nuclear industry as an unnecessary offshoot of the Cold War. I loosened up, and opened my mind and weighed the risks. But there still remained the thorny issues of radioactive waste, massive upfront capital costs, impossibly long lead times (ten years plus being a typical project duration), and the patently uneconomic operating costs – all that hassle to generate expensive electricity? Why bother, thought I, when a gas plant was cleaner, quick and cheap to build, and as cheap as chips to operate? Gas is the thing, I thought… and, ten years ago, I was quite right. Gas was indeed the thing.

Well, here we are: Global Warming’s on everyone’s lips. Oil, gas and (most especially) filthy coal are collectively considered a major threat to the well-being of the entire planet, and the name of the game’s finding a way to wean the earth off its dependence on fossil fuels.

How can the nuclear industry help?

Well, here’re some 2006 statistics as to the various sources of the world’s consumed energy, including power plants, car engines, shipping, aircraft, space rockets, everything:

Which adds up to a 100% of a very large number – 15 TWe of capacity, they tell me on Wikipedia. Dunno what that means, really, but it's probably oodles.

Basically, nukes are already here, and they’re already a very big deal – and apart from the petrol consumed driving their workers to and from the reactor plant, they’re basically carbon neutral. Yes, the problem of irradiated waste and a host of other safety and practical concerns remain, but somehow they don’t seem to be quite as scary as a bleak future of melting icecaps, a redirected Gulf Stream, and massive floods and famines. I’m certain many of those nuke engineers I knew are currently smirking into their glowing test tubes – they think their time has come, and so do many other people.

I decided to do some back of envelope calculations on the current nuclear generating capacity: lemme see, we have 440 reactors worldwide with 372,000 MWe of capacity. Some are 1,450 MWe plants, and others are (comparatively) weedy 500 MWe plants, but it averages at about 850 MWe a pop. So, that means (trust me) we’d need a total of 2,750 similar reactors to convert our mains electricity to nuclear, or 7,333 reactors (trust me again) to convert all of our energy needs to nukes – assuming we have a 100% efficient way of getting that electrical energy to drive our cars, ships, aeroplanes and rockets, which we don’t – but that’s another post.

That’s an awful lot of planning permission requests. A heck of a lot of concrete. A lot of protests, banners, controversy, water-cannons, hubble-bubble, trouble and strife.

But hang on, modern nuclear designs such as France’s so called European Pressurised Reactor (EPR for short) generates a cool 1650 MWe. So I suppose if we’ve got to go through all the inconvenience of building a reactor and putting up with the arguments and kerscuffles at the building site gates, then yer might as well build yerself a whopper. In total, ‘just’ 1,400 EPR reactors converts the planet’s entire current electricity generating capacity to nuclear. 3,750 EPR reactors could, in theory, generate enough power to fuel humanity’s entire energy needs - of course, those energy needs are growing all the time, but again that’s another post.

Let’s do some further refining; as 6% of the world’s energy’s already generated by nukes, then that can stay as is, and we’ll leave the hydro-electric industry (another 6%) to carry on with its carbon-neutral stuff. And let’s grow the alternative energy industry from its current paltry 1% up to a hopefully realistic target of 5% - nah, let's push that up to 8% to make the numbers easier. That covers 20%, leaving us with the dreaded oil/coal/gas fossil fuels at 80%. Calculations show that we need a further 1,125 EPRs to nuke our mains electricity and 3,000 for all energy needs.

Do I really suggest we use nukes to generate 80 odd percent of the world’s energy needs? Erm, nah. Even France can’t do that, and that's not for want of trying. They’re at 80% of mains electricity, so even our friends across the Channel (actually, just across the Jura mountains from where I am in Switzerland) are ‘only’ serving approximately 30% of their energy needs by nuke.

But neither can I imagine a carbon-neutral world where nuclear energy doesn’t take a significant role in world energy production – and by significant, I mean something like 50%. And that would need 1,650 new EPR reactors on top of the mixed bag of 440 reactors we have now. And suddenly, a four to five fold increase in the world’s nuclear reactor count doesn’t seem such a stretch after all. There are, after all, 250 new reactors either being constructed as I type, or at least being very seriously planned - more often than not, right next door to their earlier relatives 'cos planning permission comes easier that way.

The nukes are coming in a big way. I know it, you know it now, and for sure your government knows it - England's just voted to build another 10 reactors. But - with the exception of France who doesn’t give a buggah’s what anyone thinks - the western governments are playing their nuclear power cards very close to their chests. They’re wary of decades of anti-nuclear sentiment, and unsure where public opinion currently lies on the subject. I’d say public opinion’s on the cusp right now.