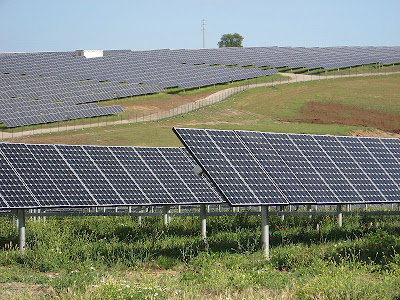 There's a secret revolution in progress, at least it's secret to the majority of the world: solar energy, or more specifically, solar heating and photovoltaics are finally coming on, and they're coming on fast.

Now it just so happens that the Chinese have pretty much sewn up the solar heating industry over the last decade or so. How so? Well, recognising that their own fast growing economy is going to need oodles of power over the coming decades, and looking sadly at their coal reserves and the price of imported oil, the Chinese have been tweaking the local bylaws in sunny places such as Shandong province to try to encourage installation of solar thermal towers onto the roof top of every home and apartment block – ideal for heating water. And the amazing thing is that once certain tax breaks and other incentives against electrical boilers (or disincentives, if you will) have been taken into account, the 'extra' cost of the solar towers is pretty much on par with the replacement cost of the traditional boiler after all. And from then on, apart from routine maintenance and a bit of spit and polish, the water gets heated for free. And few have failed to notice that China is fast becoming the manufacturing centre of the world, so the mass production of the millions of solar towers needed to heat the entire nation's domestic water is clearly within their reach – and that's one fifth of the planet's population.

Oh, and another two fifths of the planet lives right next door in Indonesia, Malaysia, India, Pakistan, etc etc, so while some solar heating tower may well not appear on your London or New York apartment block roof anytime soon, there're reasons to be optimistic that such towers will spread like wildfire across the Far East.

And here's the main point of this post – government incentives to adopt a new technology can work well, if those incentives are aimed at making the whole idea economically feasible. And those incentives have to be economic for government and for industry and for the end user. While the Chinese are just as concerned as anyone as to whether their children's children have an atmosphere to breathe in, or indeed a square patch of dry land to stand upon, they're not in the economic position to be able to pay a premium for their 'clean' energy – not yet anyway.

Meanwhile, here in the West it's photovoltaics that are the thing; only this time it's rarely an economic decision – global warming, carbon footprints, alternative energy, all of these are pretty much part of every thinking person's vocabulary.

Now the trouble with photovoltaics is that the solar panels are expensive due to the high precision to which the inner gubbins needs to be manufactured in order for the overall efficiency to be high enough to be worth the material cost – most solar panels are a combination of silicon semi-conductor laid upon a glass substrata (backing, to you and me) with yet more glass on top to keep the rain and bird poo out. And last time I heard, silicon of the levels of purity needed for use as a semi-conductor is at a price premium driven by the, ahem, computer industry. So, all that expensive material needs to be justified by higher efficiency, hence the careful precision in which a layer of silicon is carefully laid of a particular thickness, and that extra precision needs special tools, hi-tech processes and expertise which are still more expensive. And round and round we go in a sort of arms race between material costs, efficiency targets, and processing costs. Oh lord, I think I've lost you…

Long story short? Electricity generated from a 'farm' of photovoltaic panels is roughly twice as expensive as electricity generated from a stinky and environmentally disasterous coal power station. And those solar panels you see here and there on the rooftops of new houses? More like three times or even more. And the majority of those extra costs are simply because those solar panels are so very expensive to manufacture.

The Chinese, again, are carving themselves a huge slice of the photovoltaics panel market - Suntech Power, for example, has grown into a multi-billion dollar corporation almost overnight. But in this case I'd argue that this is more of an extension of their steady absorption of the world's manufacturing base – they've likewise cornered (or are working to cornering) just about every technological market, regardless of greenie aspirations, simply because business is business. This is very much at odds with their approach to solar heating, where there's a domestic policy in place at the highest levels.

So why am I pessimistic about photovoltaics in the near future?

Simply because although countries like Germany and Spain are offering guaranteed 'buy back' incentives to force the local energy companies to pay you anything up to 50 cents for any excess electricity generated on the roof of yer house, the reality is that photovoltaics electricity still has pay back economics of five years (yeah right, if yer house is in the centre of the Sahara maybe) or more realistically ten to fifteen years. Basically, the economics are right on the knife edge in 'buy back' countries, and well on the wrong side elsewhere. And there's a loser is the incentives (the power generating companies) and thus all that's really happening is that the bad economics are being pushed around from end-user to the encumbant power companies. Good intentions, I agree, and ones that have caused the photovoltaic market in Germany to explode; but not the best way to move a million households to solar. Nor a billion.

So why am I optimistic about photovoltaics in the medium term?

Well, there's a new generation of photovoltaic panels in the offing based on cheaper materials; some sort of chemical compound laid on what looks to me like tin foil. Ahem, one hopes that's not too technical for yer. There's a Silicon Valley company (Silicon Valley! Oh, the irony…) called Nanosolar that's getting the attention at the moment, because their so called 'thin film' panel is claims to cost somewhere between a fifth and a tenth of the equivalent glass and silicon panel. On what basis those claims are made, I don't know, but one imagines that the new panel has that desirable combination of cheaper materials, a slightly cheaper process, but sacrifices efficiency on a per square metre basis. Fair enough, because the world I live in has oodles of flat surfaces tilted 'just so' to the south. Think home or factory roof tops, think motorway or railway verges, think hillsides… although the best southerly hillsides around the area I live in are used for growing grapes for the vineyards – there are some sacrifices that are unthinkable.

And the 'buy back' guarantees that are so in vogue at the moment? Well, they'll be hastily revised downwards as and when cheap and cheerful photovoltaic panels become so ubiquitous that the country's power generating companies start bleeding real money.

Of course, solar heating and photovoltaics are only smallish parts of an overall global solution to clean, limitless and economic energy – what happens when the sun sets? Or in Finland during a particularly cloudy winter? Lots more to say anon, but that's enough for now.
Posted by Ric Capucho at Monday, January 07, 2008

I like your style, the particular inescapable fact that your webpage is a little bit different tends to make it so useful, I get tired of discovering same-old-same-old almost all of the time. I have I just stumbled on this page by you Thank you.